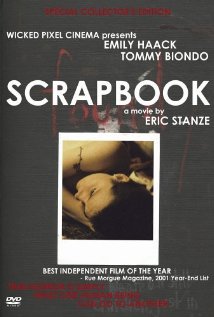 ﻿Scrapbook is a horror film about a young woman by the name Clara (Emily Haack) who is kidnapped, held captive, and repeatedly beaten and raped for several days by a serial killer/rapist Leonard (Tommy Biondo). The title refers to the scrapbook that her captor uses as a record of the ordeals of his victims, in this he keeps polaroids, scraps of clothing, and other small trophies. Leonard forces his victims to personally write in the scrapbook about their individual ordeals.
The performances by both Emily Haack and Tommy Biondo are good, neither of them look like "perfect moviestars" but are credible human characters and the scenes between them are intense.  In fact Leonard is depicted as a sad, lonely, broken man not the cliche Hollywood image of a charismatic/cunning serial killer a la Hannibal Lecter..

You might be interested to know that there is hardly any gore but the rape scenes are semi-graphic (with the exception of one scene which is very graphic) , disturbing and absolutely gut-wrenching. If you believe the film is attempting to glorify or glamourise rape or torture in any way you are way off... It´s dark and very brutal on the senses.
Scrapbook was named Best Independent Movie of 2001 by Rue Morgue Magazine. Emily Haack is very good as Carla
In the United Kingdom, a total of 15 minutes and 24 seconds were cut from the film to gain a "18" rating from BBFC.
Rating: Scrapbook gets 7 out of 7! It´s a film that is vicious, uncomfortable and uncompromising. An alternative to Hollywood´s tendency to glamorize serial killers.  It´s one of the most disturbing movies I've ever seen, I actually found myself  squirming in my seat when watching it, it is that hard to watch. A true gut punch. Not for the squeamish!
/JL
Posted by Daydreamer at 00:52