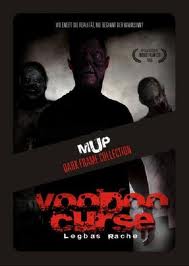 The young Christopher (Gordon Räcker) is plagued by strange zombie nightmares since he with a few Goth friends a few days ago held a occultist seance, and a doctor from the Clinic has prescribed him pills to help but they don´t. His friend Tom (Daniel Flügger) convinces him to go out with the Goth clique, and so they end up at a remote forest cemetery. Tom and his friends has brought a book which includes incantations, after which recitation you can supposedly get in touch with the dead. Christopher, still scared of his dreams wants to wait in the car, while the Goths hold a seance which causes zombies to rise from their graves .
Voodoo Curse - Legba's Rache is written, produced, edited and directed by Stefan Svahn. The acting is is decent with one or two exceptions. The soundtrack creates a subtle eerie mood and fits well. The camera work as well as the editing is very well done. The script avoids overly wooden dialogue.
Gorehounds should take note, there is plenty of gore and the zombies look really good for a low budget feature.  The zombies are depicted in the Fulci / Romero-tradition (gray, ponderous, slow).
The review is based on the DVD released by Maximum Uncut Productions and is part of a limited release of 500 copies. It´s uncut and there are english subtitles available.
Rating. 6½ out of 7. Voodoo Curse - Legba's Rache is a excellent zombie flick, good plot, decent acting, a lot of gore and the zombies look really good. I can´t resist to do a small comparison with Stefan Svahn´s previous zombieflick Lost Way Of The Zombies and his craftmanship and technique has improved greatly as Voodoo Curse - Legba's Rache is much better.