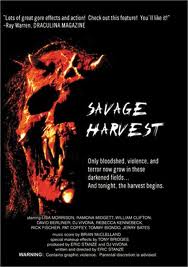 Years ago, a Cherokee elder summoned into our world an evil that eventually destroyed his entire tribe. Now, on the land that was once inhabited by the tribe, the demonic forces await the return of this long-dead Cherokee elder When these demons sense the arrival of the elders´s descendent, they gain the ability to possess human beings. A small group of innocent people trapped on the land must unlock the riddles left behind by the Cherokee elder. Demonic possession consumes one victim after another as showers of blood drench the eart and shrieks of pain echo throughout the forest. The possessed are animalistic, frenzied killing machines, feeding on the warm meat of fresh kills! Savage Harvest is written, shot, edited and directed by Eric Stanze. The acting is weak while the camerawork and editing is good and creative. The soundtrack is quite good and helps create a frantic/scary mood during the attacks. Savage Harvest has a surprisingly slow build up, it takes some time (around 30 minutes) for the horror and carnage to begin but once it kicks in it turns into gorefeast. As usual with Stanze there is a nice atmospheric sense over the proceedings, the location and setting is good (other examples of this are his flicks Scrapbook and Deadwood Park that are both literally oozing with atmosphere) and there are some effective scares.  It´s gory and the make-up fx looks good and there are a couple of set pieces that are quite impressive. The demonic-possessed make-up fx design is cool and reminiscent of Sergio Stivaletti´s design in Lamberto Bava´s Demons. There is no T & A in this.
This review is based upon the region 1 DVD release from Image Entertainment
Rating: 6 out of 7. Savage Harvest is entertaining and a impressive first effort from Eric Stanze, it was his first feature film and made on a shoestring budget. I´m sure it will satisfy most gorehounds looking for graphic carnage, and I recommend this to fans of Stanze and independent horror.
/JL﻿ 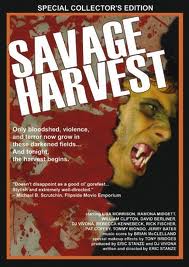 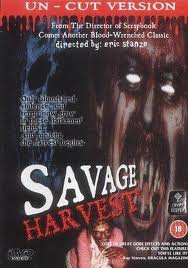