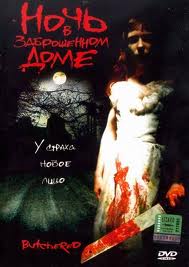 Two female aspirants to a sorority must spend one night at a haunted house but the stay is not what they or their tormentors had in mind. The Hazing is written by Eric Spudic and is directed by Joe Castro. The acting is hilarious, the camerawork and editing is decent and flick looks very cheap. The plot is very unoriginal, I like that the filmmakers choose to play it straight, there´s no intentional comedy in this but there is several scenes of uninentional comedy. The running time is only 76 minutes so it never gets boring and it´s never takes too long between the kills. It´s very gory and it´s all old school practical make-up fx so if satisfied the gorehounds in me. Highlights include heads being smashed to a pulp, throats being cut, decapitation and much more.. I do like the look of the killer. There is T & A in the the form of topless nudity from one of the female cast members.
The Hazing is known under two other titles, Butchered and Bludgeon.
This review is based on the estonian region 2 DVD release from DVD Liider, it´s uncut, has english and russian audio, estonian, latvian, lithuanian and russian subtitles are available.
Rating: 1½ out of 7. The Hazing delivers over the top gore, a pretty cool killer and some topless nudity so it´s hard not to like it despite it having some severe flaws. Recommended to die hard fans of the slasher genre and gorehounds. Btw if the name Joe Castro sounds familiar it´s probably because he´s the man responsible for the atrocity called The Summer of Massacre (2011) . 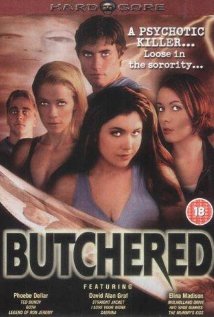 Email ThisBlogThis!Share to TwitterShare to FacebookShare to Pinterest
Labels: The Hazing (Video 2003)