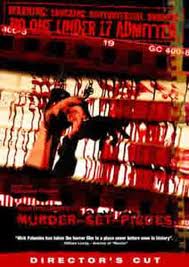 Here's a film that divides the horror fans. The "Photographer" (Sven Garrett), is a serial rapist/killer who finds his victims mainly at Las Vegas strip/pole joints. He is driven in his misogyny by a Nazi fixation and torturous childhood memories of his mother. A young girl Jade (Jade Risser), whose sister Charlotte (Valerie Baber) is dating "The Photographer", suspects that something is not right with him
Lots of full-frontal nudity from silicone enhanced porn stars that plays several of the hookers and strippers that find themselves in the clutches of "The Photographer". There is frequent displays of unapologetic misogyny and one of the taboos it breaks is the unwritten rule not to combine violence and sex as it shows the killer having sex with his victims. And this is something many serial killers do: Have sex with their victims (sometimes after they are dead). I should perhaps point out that the rape scenes are absolutely brutal and rival the notorious scene from Gaspar Noé´s Irreversible
Another surprise and taboo-busting aspect in this film appears when the killer impulses grows stronger and soon he begins killing young girls, one of these murders of young girl (approx. 10-12 years old) is graphic and has provoked controversy, then there is the baby scene where you clearly can see that the baby isn't comfortable with the scene as the terror in her face is evident.
Murder-Set-Pieces is shot on 35mm film and looks better than the majority of low budget/independent horror films out there.
The acting is not as bad as I expected it to be, especially young actress Jade Risser is very good in her role and shows real talent. Sven Garrett plays his part adequately but is one-dimensional, I like that the murderer is non charismatic,  he has no funny lines, is dead on serious, and kills brutally and without any sign of remorse. The acting ranges from wooden to stilted, new characters are presented but are simply killed off a shortly thereafter. Palumbo seems not care about creating characters an audience can identify or even sympathize with.
It´s a very brutal flick but gore hounds might want to know that there is more blood than gore. The special fx mostly consist of women caked in thick layers of nearly black blood but there are a few scenes of on screen gore which is a bit unexpected as Toe Tag Pictures is handling the effects. The death scenes is mostly carried out with as much of a sexual overtone as possible which I´m pretty sure that most women viewers would find it to be extremely shocking, disgusting, repugnant and offensive.
If you´re interested in getting hold of this film you should know that The Lion's Gate Films "R" rated version of Murder-Set-Pieces which was released on January 9th, 2007, is cut to ribbons and heavily edited by 23 minutes so if that version seems confusing and disjointed it is hardly surprising. Murder-Set-Pieces was rejected for a UK DVD release by the BBFC in February 2008 and it´s banned in Norway.
The region 0 Director's Cut DVD released by Fright Flix is available via US Amazon﻿.
Rating 6½ out 7. Nick Palumbo has one goal and that goal is to shock and sicken with vivid rape, torture and murder. This is a brutal, uncompromising film, definitely for people with strong stomachs. Is Murder-Set-Pieces the "most shocking film ever made"? No. Is Murder-Set-Pieces an above average horror sub-genre of the "serial killer film"? No doubt about it.
Posted by Daydreamer at 04:40

Email ThisBlogThis!Share to TwitterShare to FacebookShare to Pinterest
Labels: Murder-Set-Pieces (2004)