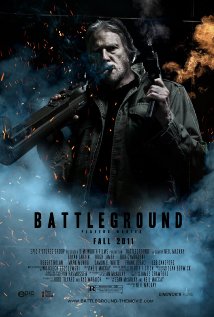 The war in Vietnam is announced to finish. american tropps are withdrawn and the relief of peace echoes through the air. However, as the calm after the storm spreads as a sigh of relief, there is something unsettling amidst the forests of North Michigan. A disturbed war veteran remains, but he lives for one reason only.. to kill.  What would happen if six rutless men stumbled across him in the eerie deserted forest, after their mass bankrobbery leaves them running from the law  with three million dollars? Would they be better off facing the cells of prison or can they escape from the murderer out to get them..? That´s what it says on the region 2 DVD cover, a much better description is available on IMDB: Six bank robbers become stranded in a off the grid forest when their vehicle goes missing during the planning of their escape from the police. Now stranded and on a time crunch to make their flight headed out of the country they try to walk out of the forest. they soon encounter a Vietnam veteran who was mentally damaged somehow in during the conflict and now kills anyone who enters his forest using his military training and some tactics used by the VietCong.
The IMDB description sounds much better doesn´t it? Yeah, I think so too.

Skeleton Lake is written by Sean McAulay and Neil Mackay who also is the director. The acting is mostly good and Robert Nolan is top notch as always. It´s fast paced, the camera work and editing looks good, the soundtrack is good. There are some gore, it´s a combination of practical fx and computer gendered fx, the highlight is the skinning of a decapitated head.
This review is based the UK region 2 DVD release by Signature Entertainment.
Rating: 7 out of 7. Skeleton Lake is a very entertaining and well made action/survival horror film (given it's low budget).
/JL 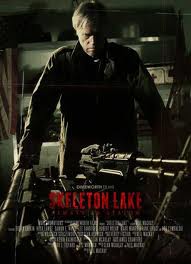 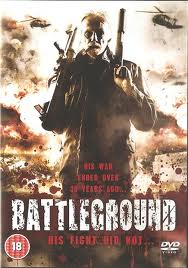