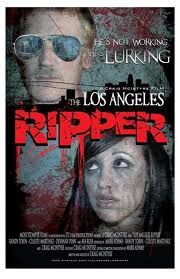 First I´d like to thank Craig J. McIntyre for sending me a screener.
Kristy White (Celeste Marie Martinez) moves to Los Angeles to stay with her dysfunctional aunt Peggy (Beverley Bassette) and her cousin Angel White (Chase Monroe) to pursue her singing career and become a star. Meanwhile, a brutal serial killer is on the loose in the City of Angels. Kristy sets out to explore Los Angeles and to see what this beautiful city has in store for her. She meets and parties with Angel's cool friends and soon realizes they are up to some risky party behavior! When she meets Angel's drug dealing friend Grahm  (Randy Tobin) things start to get pretty weird and scary for Kristy White. The city of dreams may just become a nightmare for her! The Los Angeles Ripper is written and directed by Craig J. McIntyre, it’s a low-budget splatter/exploitation film. The acting is mostly bad but Randy Tobin and Celeste Marie Martinez are pretty good.  There is a unnecessary subplot as we get to watch Kristy's singing lessons and those scenes are overlong, distracting and painful. The camerawork and editing is annoying, the soundtrack is bad and is sometimes utterly terrible. There is some gore, a few graphic killing scenes, for instance there is a eyeball gouging sequence, and those scenes are truly the highlights of the film and the special fx is surprisingly effective despite being low-budget.
This review is based on a screener sent to me.
Rating: 1½ out of 7. The Los Angeles Ripper could have been better if they had focused more on Grahm and avoided the painfully bad scenes with Kristy's singing lessons.
/JL 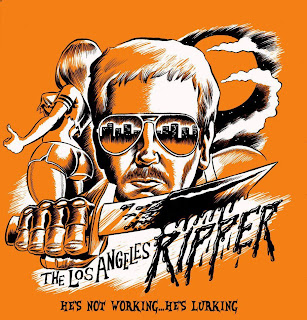 Email ThisBlogThis!Share to TwitterShare to FacebookShare to Pinterest
Labels: The Los Angeles Ripper (2011)