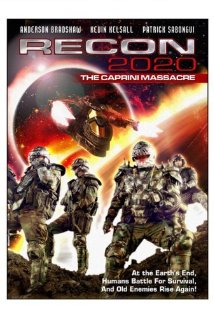 In the year 2020, the Earth has become a barren rock from radioactive devastation. Protected by the Galactic Marine Infantry, (GMI), the remaining human race, struggling for survival on a distant star, is terrorized by the evil Ma’har alien race. While on a reconnaissance mission in the Caprini system, Sergeant Sharp /Andy Bradshaw) and his GMI soldiers discover the Ma’hars hidden laboratory where they’ve been creating a horrific breed of terrorists. The aliens’ new bio-weapons are reproductions of mankind’s mythical creatures - zombies, werewolves, vampires… Sergeant Sharp and his elite squad find themselves in an action-packed battle with the bloodthirsty monster assassins. But, the greatest danger of all may be from a former GMI soldier with a grudge, who now works for the deadly Ma’hars. Recon 2020: The Caprini Massacre is written William Alexander, Allan Barnes, Andy Bradshaw, Allan Yuk-lun Chou and Christian Viel who also is the director. We get some not so decent acting from some members of the cast provides some unintentional comic relief. The camerawork and editing is semidecent... The gung ho Galactic Marine Infantry is obviously inspired by the colonial marines of James Cameron´s classic Aliens, one look at them and you´ll see what I mean but to be fair they actually look pretty cool in their uniforms, body armour and so on. Sady the action isn´t very exciting and is sometimes downright boring. There is very little gore so I won´t comment on that, the creature designs aren´t very good, they use both practical make-up fx and computer gendered creatures. CGI is also used for the spaceships, dropships and robots, some of it looks pretty decent but some look really bad. There is a moment of T & A in the first scene of the film and I wish we would have seen more of the stunningy beautiful and sexy Gillian Leigh who plays the character Fooks.
This review is based upon the region 1 DVD release from Maverick Entertainment Group, according IMDB the title is Power Corps and it´s registered under that name.
Rating: 2 out of 7. Recon 2020: The Caprini Massacre is ok entertainment for the moment but not much more than that. 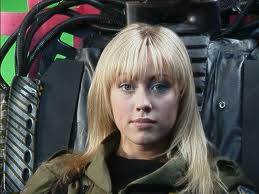 Email ThisBlogThis!Share to TwitterShare to FacebookShare to Pinterest
Labels: Recon 2020: The Caprini Massacre (2004)