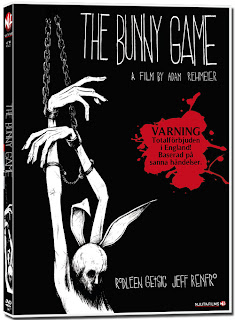 A prostitute (Rodlen Getsic) looking for her next meal hitches a ride with a trucker (Jeff Renfro) that leaves her praying for her next breath. The Bunny Game is written by Rodlen Getsic and Adam Rehmeier who also is the director. In the film the characters never once tell each other their names. The acting is great, Rodlen Getsic is really amazing in her portrayal of her character and Jeff Renfro is nothing less than excellent as the trucker, he´s incredibly creepy. The film is beautifuly shot in black and white, has creative editing but some might be put off by the rapid-fire edits. There are a lot of scenes featuring tormenting and humiliation. There are rumors online that everything in the film is real and the rumour is true, it happens for real and there is no special fx.
The Bunny Game has been banned in the UK and Ireland
This review is based on the Njuta Films DVD release which is All Region.
Rating: 7 out of 7. Once in awhile there comes a film that truly hits you like a unforseen force, The Bunny Game is one of those films, it´s brave and no holds barred. It´s disturbing, stomach churning and captivating. See it!!
/JL 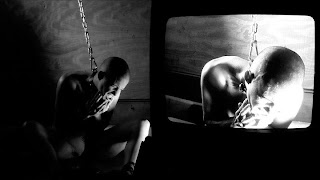 Email ThisBlogThis!Share to TwitterShare to FacebookShare to Pinterest
Labels: The Bunny Game (2010)