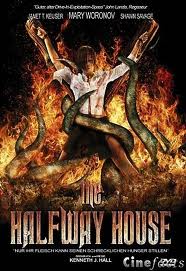 Young girls are disappearing in and around the Mary Magdalen Halfway House for Troubled Girls. Desperate to find out what became of her sister, Larissa Morgan (Janet Tracy Keijser) goes undercover to infiltrate the Catholic-run institution. Once inside, she encounters Father Fogerty (Joseph Tatner), a priest with a passion for punishment; Sister Cecelia (Mary Woronov), a nun with a dark past plotting an even blacker future; Edwina (Monica Shere) and her love-toy Cherry Pie (Stephanie Leighs); tough Latino Angelina (Athena Demos) and her home girls and a sinister handyman named Lutkus (Cleve Hall). It's not long before she's caught up in a twisted web of sadism, violence, and wanton lust before finally learning the ultimate secret of the Halfway House. The Halfway House is written and directed by Kanneth J. Hall and is inspired by H.P. Lovecraft. It´s a mix of comedy and horror and in my opinion that mix is seldom succesful. The acting is bad but I think it´s intentional cheesy acting from the cast, it all played tongue in cheek. The camera work and editing is ok, got nothing to complain about. The pacing is good and the soundtrack is ok.
Some decent gore, all practical fx, the creature looks like crap, but I think it's intentional and it´s nice to see practical creature fx instead of crappy CGI.
Good looking girls (both Janet Tracy Keijser and Stephanie Leighs has smokin' bodies), lots of female nudity and sexual situations.
This review is based upon the german region 2 release by Fear Express/Anolis, it´s uncut and english audio i available.
Rating: 6 out of 7. The Halfway House isn´t scary but it´s very  entertaining and it´s an example of a that sometimes you can get a positive result of mixing of horror and comedy. If you are a fan of cheezy sleaze this one is for you.
/JL﻿ 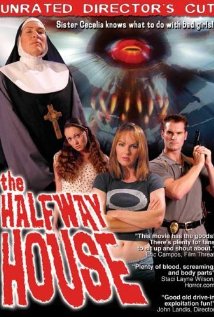 Email ThisBlogThis!Share to TwitterShare to FacebookShare to Pinterest
Labels: The Halfway House (2004)