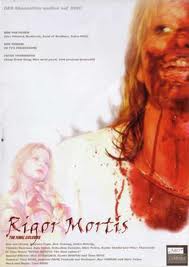 Left alone by the death of their mother, and with no father present, brothers Ritchie(Andreas Pape) and Norman (Sebastian Gutsche) only have each other to rely on. Ritchie struggles to balance his life between looking after Norman and developing a meaningful relationship with his casual girlfriend Nadja (Anja Gebel). One day, when Nadja is out walking Norman in the countryside, a new computer virus falls into the hands of Norman after a person covered in blood gives it to him. Having seen the object passed to Norman, Queens (André Reissig) believes they are part of a conspiracy to rob Denver (Dan van Husen) of the super virulent computer virus that his organisation has created - and intends to sell to the highest bidder. The fact that Nadja is calling Ritchie at the time makes Queens even more convinced of their plot. To find out their involvement and have his property returned, Denver sends his team of sadistic torturers to kidnap Nadja and extract information and they will do anything to get it. Rigor Mortis - The Final Colours is written and directed by Timo Rose The  acting is pretty average, no one stands out as better or worse. It´s obvious that Timo Rose has a lot of ambition and the film isn´t a simple splatter flick such as Violent Shit. The pacing is good, good camera work and editing but the limitations of the budget is visible. The team creating the special fx are Olaf Ittenbach, Timo Rose and Raman Shafai and let´s just say that Rigor Mortis -  The Final Colours features some really well made, gruesome and nasty gore.
The review is based on the DVD released by Neo Cinema, it´s uncut and there is english subtitles available.
Rating: 6½ out of 7. Rigor Mortis - The Final Colours promises and delivers the gore and nastiness. For me the shortcomings in the story and film making are easily overlooked
/JL﻿
Posted by Daydreamer at 19:10